The Untapped Potential of Your Middle Mile 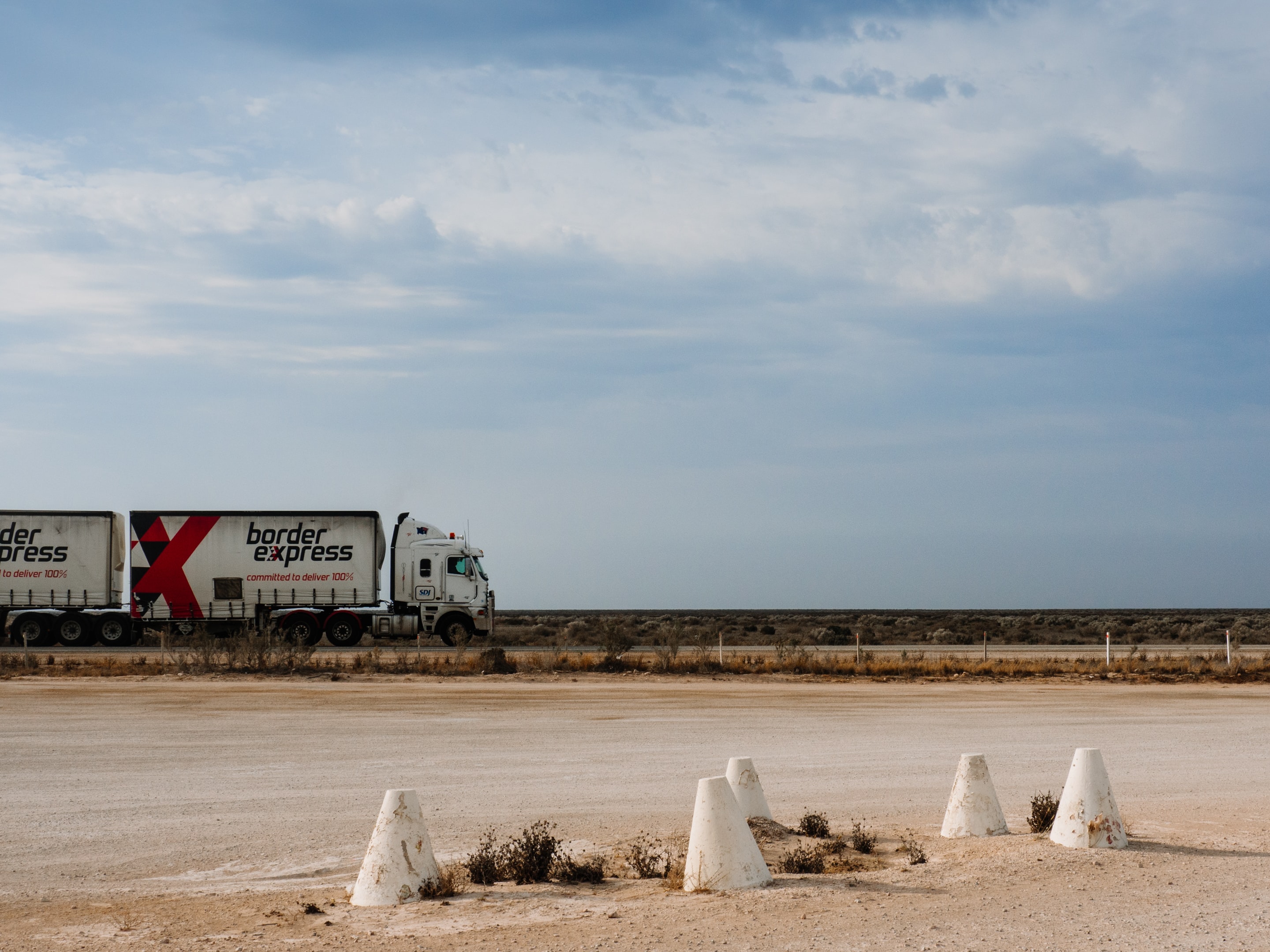 Dan Smith gets a lot of sandy foot traffic through his surf shop in beachside San Diego, but Mary Bell, his most passionate customer, lives two time zones away, in decidedly less hospitable Minneapolis, where every October she swaps out her fleece for her trusty wetsuit and rides the frigid waves of Lake Superior.

It’s something of a modern miracle that Mary can log onto Dan’s website, add an equipment bag and her favorite board wax to her cart, and receive both on her doorstep in a matter of days. Part of that miracle is made possible by recent innovations in last-mile logistics, a $100 billion industry that specializes in delivering packages, in increasingly rapid and ingenious ways, from local fulfillment centers to a customer’s door.

But the real challenge, which neither Dan or Mary have any real exposure to, is getting the items from San Diego to Minneapolis in the first place.

One option for shippers like Dan is to go through a legacy carrier such as FedEx or UPS, which generally handle packages competently and ensure their secure delivery from one destination to another. But the moment carriers leave from the warehouse of origin, the process remains stubbornly attached to the way it's been done for decades. It is possible that the package will touch a billion dollars worth of infrastructure on its journey as it is unloaded, sorted and reloaded multiple times before landing on Mary Bell’s doorstep. Each interaction represents not only cost, but also opportunity for damage or theft. The carrier may announce unexpected service delays, begin charging seemingly arbitrary surcharges, or worse—suspend service to a particular region entirely.

Although retailers like Dan enjoy the convenience of their carrier’s infrastructure, buildings, routing technology, and customer services, they lose time and money by surrendering to an outdated hub-and-spoke process that’s baked with inefficiencies. In their effort to preserve margins and maximize volume, legacy carriers end up with wasted segments that are costly and bad for the environment.

Today, a new crop of logistics companies are aiming to create those middle-mile connections (the ones between a warehouse and a local delivery station) in a smarter, cheaper, and more transparent way. They’re not asking how to optimize the last mile—that’s already been answered with everything from e-bikes to autonomous delivery robots. Instead, they are developing ways to get a package from the warehouse to the local delivery station more efficiently, revolutionizing a complex but archaic process in a way that leverages artificial intelligence, fuel-efficient commercial vehicles, and innovations in industrial real estate.

The middle mile, which usually represents the farthest distance a package must travel, is where the most exciting innovations in logistics and supply chain are happening today, and the leading thinkers in the space have adopted these three principles as their trusted guide.

Young people tend to groan when told to invest early. But it’s this admittedly unsexy concept of compound interest that plays a huge role in helping you win your middle-mile logistics. Shippers, like college grads keen to spend their first paychecks, are often eager to ship their goods out of the warehouse as quickly as possible, hoping the carrier will handle the thorny sortation and splitting later down the line.

Faith in the legacy carrier to do this efficiently, however, is misplaced. Shippers often succumb to the misconception that they do not have enough space to undertake sortation at their fulfillment docks. Or they may be hesitant to incur the cost of doing it themselves. But rushing at the outbound dock forecloses a valuable opportunity to maximize efficiency from the outset and increases the burden on last-mile carriers to make up for lost time.

Rather than loading up their trucks indiscriminately, today’s middle-mile innovators are investing more time at the loading dock to refine sortation using predictive technologies, define more intentional routing splits, and ensure the rest of the journey unfurls as smoothly and efficiently as possible. It’s intentionally seeking efficiency from the very beginning of a package’s journey—what we insiders call the first touch—that drives this new middle-mile ethos.

For good reason, the shipping industry’s favorite word is scale. Thousands of miles—two thousand in Dan and Mary’s case—separate a shipper from a customer; carriers are growing their margins and demanding minimum volume requirements from customers; and cavernous warehouses sprinkled across the country are burdened with pockets of under-utilized space.

But thinking big has its downsides: In an effort to make the most of their capacity, carriers are disinclined to travel with anything less than full truck loads. This means it can take up to 24 hours from the time the first package leaves the loading dock to the time the trailer actually hits the road—an entire day lost to structural inefficiencies that has to be regained later through increasingly competitive last-mile innovations.

This style of ‘thinking big’ made sense in a rapidly modernizing post-war world, where technology effected tectonic societal change with blunt force and large, centralized institutions set the rules of engagement. But in today’s world, the focus has moved toward small—decentralized governance, nanotechnology, agile development, and mesh networks.  to the small—nanotechnology, AI, computers,  world continues to move toward smaller, much cheaper, and.  Many organizations have benefited from using numerous nodes when it comes to distributed services including the military, telecommunications, and satellite companies. Think about how Elon Musk’s Starlink—clusters of low-altitude, human-sized satellites—enabled communication in war-torn Ukraine. Can these same concepts be applied to the middle-mile? I believe the answer is yes.

The first step of thinking small involves reimagining the container itself. Instead of uniform shipping containers, which don’t historically distinguish between the objects inside of them, middle-mile innovators are relying on smaller, smarter containers that group goods based on where they’re going. Using software for AI-derived shipping routes, today’s shippers are able to get packages directly into the system, reducing batch sizes, and staggering deliveries more efficiently.

Today’s logistics space is riddled with friction and misaligned incentives. Consumers expect accurate delivery dates, up-to-date tracking, and fast transit times. Shippers seek capacity, and low-cost delivery solutions tailored to their clients' needs. Carriers want to maximize returns for shareholders, which often means charging shippers the maximum rate the market will support while being conservative with investment. While all of these different players rely upon each other, they are working at cross purposes. They’re playing as if it’s a zero sum game.

High demand from shippers has likely reduced incentives for FedEx and UPS to make long-term systemic improvements to network design. And shippers, either due to volatility or a desire to artificially secure capacity, can provide unreliable volume predictions and hasty packaging to the loading dock. The outbound dock, where custodial control is passed from shipper to carrier, is often the point of greatest potential value creation, but there are incentives on both sides to leave the space as a black hole.

The next frontier in middle-mile logistics empowers these forward-thinking businesses to tap into the system at the rate that works for them, enabling a safer ‘test and learn’ environment for innovation and experimentation. Not only will advancements in technology mitigate cumbersome, capital-intensive infrastructure requirements, but the client solutions themselves will be modular and quick to configure.

Today’s shippers are becoming increasingly sophisticated and motivated to actively participate in the delivery system. Warehouse owners, carriers, and 3PLs want to choose a narrowly tailored solution that works for their needs. Fortunately, middle-mile innovators are atomizing their offerings in an effort to create a truly modular experience that has efficiency as its guiding standard.

Stay ahead of the curve.

Sign up to receive the latest thinking and updates from CloudSort.
Thank you! Your submission has been received!
Oops! Something went wrong while submitting the form.
All Rights Reserved © 2022 CloudSort
Terms & Conditions